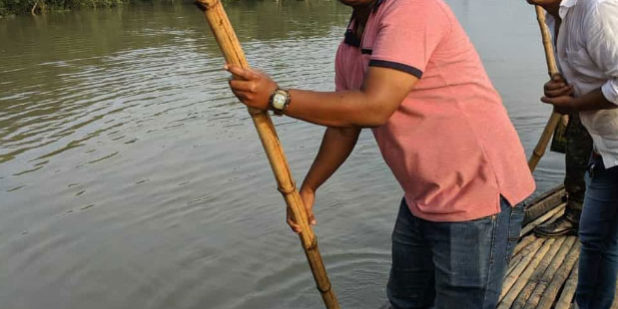 The Atreyee River, which supplies irrigation water to Balurghat, a small town in West Bengal, has faced drought conditions due to the construction of a dam. Tuhin Subhra Mandal, an environmental activist and founder of the non-profit Dishari Sankalpa, is concerned about the misinformation that is rampant concerning water issues.

Tuhin Subhra Mandal is concerned about the disinformation related to water issues in his community. Credit Internews

He shares a Facebook video of another river, the Kaveri in Tamil Nadu. The video claims that the river “miraculously” enters a drought-hit village a day before Navratri, a Hindu festival. Tuhin says he wants people to use scientific information when evaluating the water issues (the additional water is most likely due to an intentional release from a dam). “These videos only add to superstitious practices and harm rivers.”

Tuhin and other fellow volunteers – who often refer to themselves as “water warriors” – participated in a misinformation training with Soma.

“The FactShala training helps us a lot because when we are in the field, a lot of people ask us about manipulated images they think are true and often we don’t know how to counter the false claims,” says Tuhin.

After attending the training, Tuhin started busting myths and misinformation related to the environment in Uttar Patra, a local Bengali publication that he runs to make people aware of environmental issues. He wants people to analyze the issues scientifically so they can critically assess videos that might add to superstitious practices.